History Lectures in the Farm House

Farmstead Arts presents lectures on a variety of topics including history, preservation and the arts.

Lectures are held in one of our beautiful galleries in the historic Farmhouse at Farmstead Arts.  This intimate environment invites the listener into the heart of the narrative, creating an informative and entertaining experience for all.  A reception is held after each lecture with refreshments and an opportunity to meet and talk with the presenter.

The farmhouse is wheelchair accessible.  Anyone anticipating the need for additional accessibility services may make a request by sending an E-mail to admin@farmsteadarts.org in advance.

The Constitution - TO BE DETERMINED 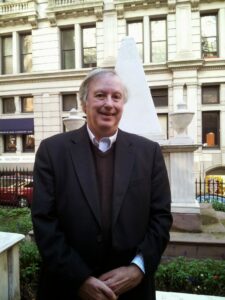 This lecture, originally scheduled for Sunday, April 26 is postponed due to the corona virus outbreak. We are working to reschedule this event and will post a new date/time when known.

This special program about the U.S. Constitution – how it was drafted, adopted and continually evolves – provides insights into the vibrant cornerstone of our great democracy.

Reclaiming Our Voice: New Jersey’s Role in the Fight For Woman Suffrage - TO BE DETERMINED

This lecture, originally scheduled for Sunday, May 17, is postponed due to the corona virus outbreak. We are working to reschedule this event and will post a new date/time when known.
Carol Simon Levin portrays Lillian Feickert,
president of the New Jersey Woman Suffrage Association from 1912-1920
This program is funded by the New Jersey Council for the Humanities. 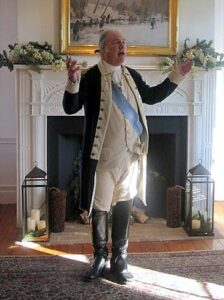 George Washington was no stranger to New Jersey.
Registration is recommend as space is limited.To register click here.
Meet David and enjoy some light refreshments after the lecture.

This program is funded by the New Jersey Council for the Humanities.

From Trenton to Princeton to Morristown, the General spent more time here than in any other state. Join General Washington, played by David Emerson of History on the Hoof, as he reminisces about his brightest and darkest moments during the battles and encampments of the “Cockpit of the Revolution.”

For the past fifteen years David has portrayed George Washington, with an emphasis on his leadership and activities during the American Revolution, and a specialization on Washington’s battles and encampments in New Jersey.

David Emerson makes his living by being a character. For over 30 years, David has worked at living history museums and as an independent storyteller, teaching history through the eyes of a “person of the past.” He is a veteran of Colonial Williamsburg, Plimoth Plantation, Morristown National Historical Park, and the Old Barracks Museum. David’s academic credentials include graduate study at the College of William and Mary, and he studied at Oxford as an undergraduate. David is a much-requested speaker with the New Jersey Council for the Humanities.

In 1993, David and business partner Stacy F. Roth launched “History on the Hoof,” an educational performance company specializing in unique presentations on themes in American History. History on the Hoof’s programs combine scholarship with a variety of interpretive techniques, including storytelling, songs, demonstration, and roleplay.

For the past fifteen years David has portrayed George Washington, with an emphasis on his leadership and activities during the American Revolution, and a specialization on Washington’s battles and encampments in New Jersey. He has appeared as the General for many American Revolution 225th and 235th Anniversary events including “The Retreat Across the Jerseys;” the reenactments of the battles of Trenton and Princeton, “The Road to Monmouth;” and events commemorating the winter encampments in Morristown, Valley Forge, Middle Brook and Fredricksburgh (Pawling,N.Y.). His George Washington Press Conferences have been featured in the “Patriot’s Week” historical festival in Trenton, NJ. He has appeared as Washington for numerous museums, community organizations, historical societies, schools, and other gatherings in New Jersey and surrounding states. He has been featured in documentaries for The History Channel, BBC-Granada and PBS and the New Jersey Network production “The Ten Crucial Days.”

Our office and gallery are now open to the public on an abbreviated summer schedule. The best way to reach us is by email at admin@farmsteadarts.org. We'll fully reopen after Labor Day!