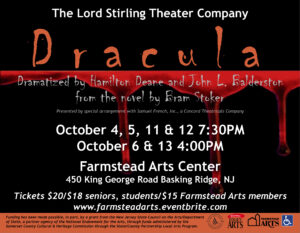 In the ADA accessible English Barn

Tickets available in advance here or cash only at the door.

CASH ONLY AT THE DOOR

It’s a real barn – dress for the weather!

Under the artistic direction of William Ward, The Lord Stirling Theater Company is a dynamic new community of creative artists based in Basking Ridge.  The group is committed to presenting innovative theater for diverse audiences including play readings, full productions of great classic theater, new works and exploring the American experience through compelling productions that illuminate and celebrate history, culture and literature.  The theater group fosters the next generation of theater artists and audiences by providing unique hands-on educational programming and training in all aspects of theater production. 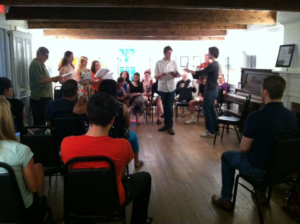 The Farmstead Players Play Reading Group presents play readings in the Farmhouse.  The readings are open to the public and admission is free. Plays are either in the public domain or read with the permission of the playwright.

Readings are performed like radio plays with an emphasis on imagination and voice. The actors, who read from scripts, may sit or stand and incorporate some movement. A narrator may read the stage directions.  Members of the public are invited to take part in the reading or enjoy as audience members.  To participate, please contact Director William Ward by email at wjpward@verizon.net to be sent a copy of the script. Please copy these scripts if you are planning to attend.

The Farmstead Players Play Reading Group is the first group of its kind in the Somerset Hills community.  Prior plays presented include Tight Rope, by David Serra; The Devil’s Disciple by George Bernard Shaw; The Country Wife, by William Wycherley; Marty by Paddy Chayefsky; The Rover by Aphra Behn; The Importance of Being Earnest by Oscar Wilde;  Measure for Measure  by William Shakespeare, Tartuffe by Moliere, Miss Valentine by noted NJ Playwright, Nadine Bernard  and a unique evening of original one act plays with the playwrights coming from NYC and Washington DC in attendance.

Whether you enjoy comedy, drama or classics, there’s something for everyone at the Monday night play readings at the Farmstead. Here’s what a few of the cast and audience members had to say:

“Last night’s reading really was refreshing. Years ago I picked up The Devil’s Disciple and never finished it. The reading at Farmstead made it come alive as was meant to be.”

“A charming space and very nice people. A total win.”

“I had a blast over at Farmstead Arts Center Play Reading Group tonight. Everyone was wonderful from the cast to all who run Farmstead.”

A resident of Basking Ridge, William Ward studied drama and technical theater at Carnegie-Mellon University in Pittsburgh. He has worked at many venues in New York City including The Irish Repertory Theater, LaMama E.T.C., Minetta Lane Theater, The Classical Theater of Harlem, Theater 59E59, The Cell Theater, The Lyceum Theater, Wings Theater and The Kraine Theater.

In Europe, William worked at noted theaters in Belgium, England, Scotland, Wales, France, Italy, the Netherlands and Germany. Regional credits include the Kennedy Center in Washington, D.C.; Playhouse in the Park and the Downtown Theater Cabaret in Bridgeport, Connecticut; Cumberland Theater in Maryland; Falmouth Playhouse in Massachusetts, Bucks County Playhouse in Pennsylvania and many others. He performed as an actor and musician in the first national tour of the Broadway show, Buddy, the Buddy Holly Story, and in the national tour of The Sound of Music. As a musician, William has played in concert with rock artists Dexy’s Midnight Runners, ABC, Culture Club, Kajagoogoo, Simple Minds, Time Bandits, Hot Chocolate, Gloria Gaynor and Al Martino.

He has designed sets for Light Opera of New Jersey, Wings Theater and various productions in the New York Fringe Festival, including the acclaimed show, Kiki, Baby. William is a stage manager and head of props construction at The New Jersey State Opera.

The English Barn Theater and the Farmhouse are wheelchair accessible.  Anyone anticipating the need for additional accessibility services may make a request by sending an e-mail to admin@farmsteadarts.org in advance.