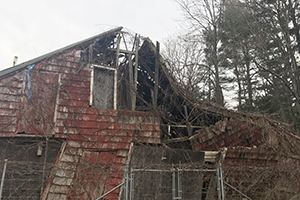 This out-building features gable-end entries and upper level loft with built-in grain bins. With mostly hewn timber, this building (once restored) will display a combination of Dutch and English framing techniques with clapboard and shingle siding. The wagon house exhibits some 20th-century alterations. It measures 30 feet wide, 28 feet long and 22 feet high at the peak. Special features include: Asymmetrical plan; timbers incised for shingle lath (at 13” intervals) on West side only;  blind pegs, most of the original timber-framed grain bins in place’ cogged wagon hoist and, brick logging in the granary, collar ties, crossing wind braces; Dutch, English and Dutch-English sections and full length and partial, butted tie-beams, one tie-beam pegged into opposite layout faces. 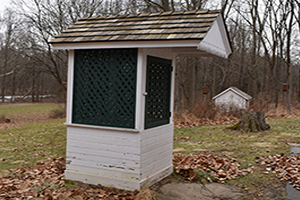 Another of the ancillary structures once common on area farms in the 1700’s and 1800’s.

Hand-dug and lined with stones to prevent collapse, the well measures 3 feet in diameter and was likely used from the time the farmhouse was built. 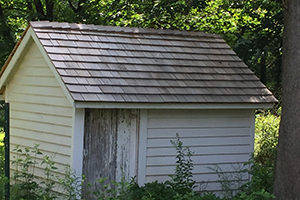 Another of the ancillary structures once common on area farms in the 1700’s and 1800’s.

A brick ice pit and the original frame superstructure of an Ice House probably predates 1850.  Likely used as a place to store food throughout the year, ice houses were commonly used prior to the invention of the refrigerator.

The Ice Pit on the KMS Property is near the Passaic River which likely provided a natural source of winter ice. Ice, packed with straw or sawdust for insulation was used primarily to store food.