With hand-hewn rafters with pegged wind braces (which have held up the roof for nearly 300 years) the barn is a notable example of the English barn style with traditional shiplap and vertical board siding. The Farmstead’s English Barn was listed on the New Jersey State Register in 2002 and the National Register of Historic Places in 2003. 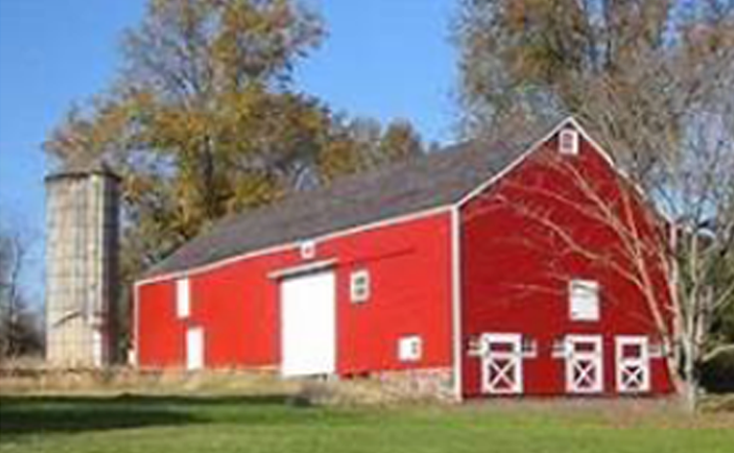 Eastern Half
The four-bay eastern half of the main barn has a notable early example of the English barn type, exhibiting two rare surviving features:

Western Half
A three-bay extension to the west, also of mortise-and-tenon, hewn-timber construction, was added c. 1840 utilizing the frame of a smaller English barn. Built separately, moved and enlarged in order to expand the hay barn, raising holes in perpendicular faces of corner posts.

Despite this addition and other alterations contemporary with the construction of the adjoining dairy barn in the early 20th century, the original English barn can be readily distinguished and remains relatively well preserved.

The complex underwent extensive renovations as a dairy operation during the first third of the 20th century. Outbuildings dating to that period included a frame gambrel-roofed dairy barn and concrete silo adjoining the main barn, along with three small frame sheds. In 2004, after two successive snowstorms which caused the roof to collapse, the Dairy Barn structures were removed. The foundation still exists to the south of the barn.

Restored and adaptively repurposed as an arts center.
Additional restoration and preservation projects in progress/planning…

Our office and gallery are reopened to the public in compliance with NJ Covid-19 protocols.
The best way to reach us is by email at admin@farmsteadarts.org
Check out our winter session art, guitar and photography classes!