Born in 1758, Clarkson Stelle was one of the eleven children of Oliver Stelle and Mary (Runyon) Stelle).

Upon Oliver Stelle’s death on June 3rd 1832, at age seventy-six, his son, Clarkson inherited the homestead farm (located between the Passaic River and present-day King George Road) and an adjoining tract to the south on the west side of the road.

Clarkson Stelle died intestate on July 13, 1850, at the age of 52, having “committed suicide by hanging himself in the wagon-house.”  To settle his estate, his farm was sold at a court-ordered auction in 1852. The newspaper advertisement of the sale gives a general description of the property:

Splendid FARM for Sale. …. the Real Estate whereof Clarkson Stelle died seized, comprising the HOMESTEAD FARM of the said deceased, known as the “Oliver Stelle Farm,” containing about 200 acres of first-rate Plough, Meadow and Grazing Land. About 30 acres of very heavy Timber on said Farm. The improvements are a large and good Frame House, two large Barns, Cow House, and every desirable out building, all in good condition. A road running through, divides the Farm, and will be divided or sold together. There is a great variety of fruit on said Farm. It is also well watered, and the Passaic River runs on the east side of said Farm.

The property was purchased at auction by Isaac Runyon, Clarkson Stelle’s son-in-law.

Clarkson was married to Lucinda Terrell and they had five children. 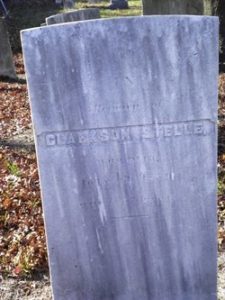