Born on August 1, 1756, Oliver Stelle was one of nine children of Christiana Clarkson Stelle and Rev. Isaac Stelle (1718 – 1781). Rev. Stelle was a private in the Middlesex Regiment during the revolutionary war and was the third pastor of the old Piscataway Baptist Church.

Ephraim Martin sold the farmstead to Oliver and Samuel Stelle, the stepsons of his wife, the former Catherine Stelle, in 1794.  Oliver, a farmer and property investor, owned multiple house lots, a distillery and cider mill in the Basking Ridge and Piscataway areas.

Oliver Stelle’s will and inventory identify several rooms and features of the farmhouse:

His 1829 will mentions the “west front room,” the “west back room,” the “middle back room,” and the “entry” and/or “entry chamber,” as well as the kitchen, cellar and well, indicating that his residence had a double-pile first-floor plan with a range of at least three rooms front and back, and thus establishing the configuration of the present house by that time.

Although the upper stories of the region’s early one-and-one-half-story houses typically were unfinished or partially finished, the presence of a stairwell railing with an apparently late 18th/early 19th-century provenance in the upper hall certainly suggests that upper story was finished, at least in part, as living space during this period.

Other features of the house that, based on physical or stylistic evidence, can be dated to c. 1800-1830 include the pilastered, late Federal style mantel in the present living room and brick cooking fireplace and bake oven in the southeast room.

Oliver Steele may well have been responsible for remodeling the house and possibly for enlarging it to the east.

The inventory also identifies the “wagon house,” by name and is mentioned in three entries relating to the storage of lumber, scythes and “old harnesses,” presumably is the one extant for which physical evidence suggest a late 18th/early 19th-century construction date.

Oliver Stelle lived at the Farmstead from 1794 to his death in 1832. The 1830 census documents the composition of Oliver Stelle’s household towards the end of his life and indicate he had freed at least 2 former slaves who continued to work at the Farmstead, employed as domestic servant and farm laborer. [Alan A. Siegel, The Baptist Meeting House Cemetery and Church, pp. 15 & 16; US Census, Bernards Township, 1830; Somerset County Deeds, Book Q, page 178; “Additional Slaveholders’ List in Somerset,” Somerset County Historical Quarterly, VI, page 96.] 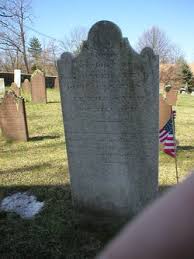